Both Bayern Munich and Tottenham Hotspur have had contrasting league and
Champions League campaigns. Both sides had already secured qualification past the group stages, but sat outside the Champions League places in their respective leagues. Tottenham and Bayern had both recently parted ways with their managers, with José Mourinho and Hans-Dieter Flick in the dugouts. In the grand scheme of things, this match was not of much importance, as neither Bayern (1st) nor Tottenham’s (2nd) position in the group could be altered, so both coaches could afford to field rotated sides, although Bayern favoured quite a strong side in relation to Tottenham’s. However, the match still produced an interesting tactical battle between Mourinho and Hansi Flick, and the Tottenham players would have been seeking revenge as the wounds from the 7-2 drumming at the hands of Bayern will still be fresh.

In this tactical analysis, I’ll take a look at the tactics used in the final group stage match between Bayern Munich and Tottenham Hotspur. 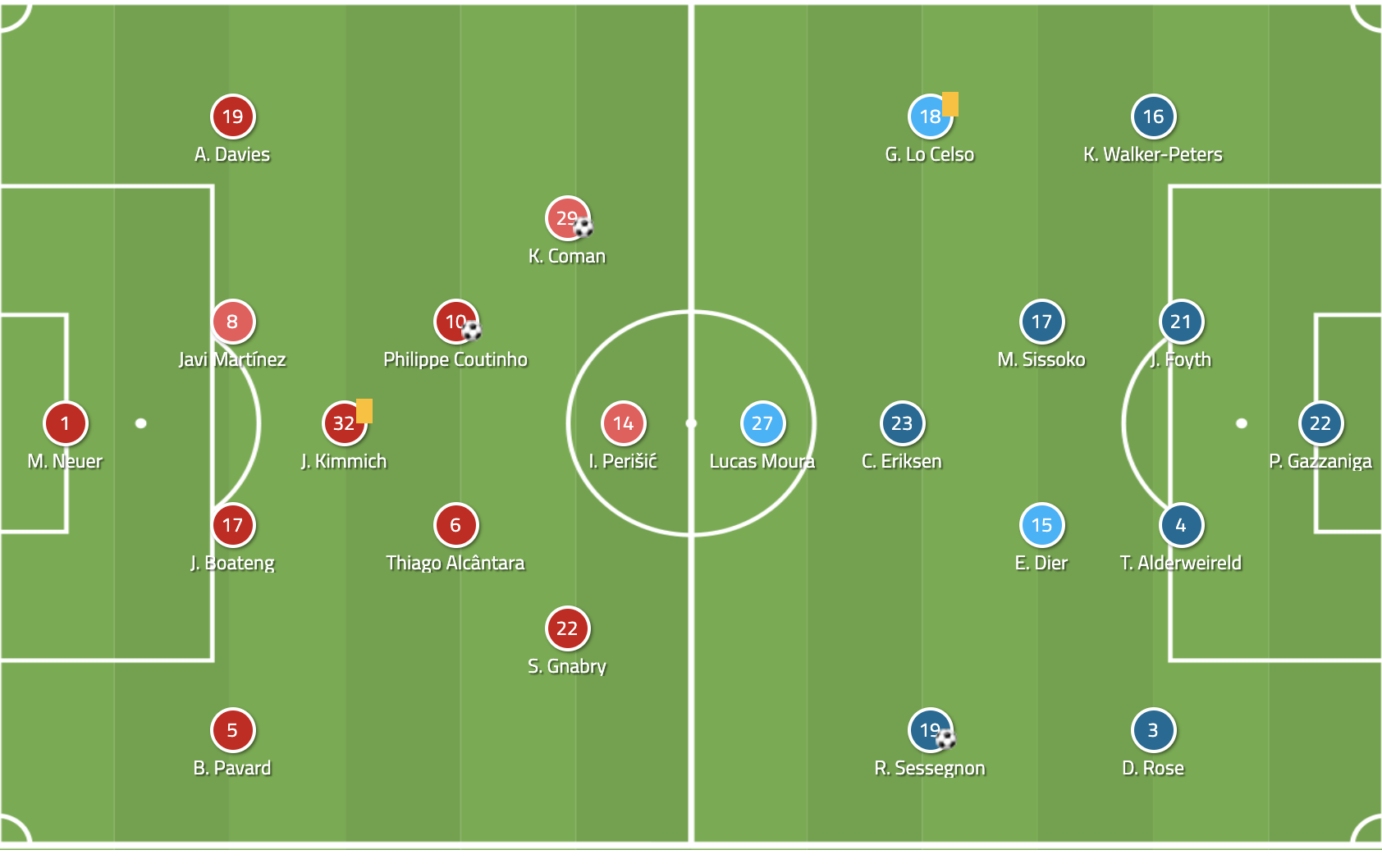 Bayern lined up in a 4-3-3. Manuel Neuer captained the side in goal, protected by a back four of Alphonso Davies, Jérôme Boateng, Javi Martínez and Benjamin Pavard. Philippe Coutinho, Joshua Kimmich and Thiago Alcântara played in midfield. The notable absence of a traditional striker left Kingsley Coman and Serge Gnabry to play either side of Ivan Perišić.

Tottenham lined up in a 4-2-3-1. Paulo Gazzaniga started in goal behind a back four of Danny Rose, Toby Alderweireld, Juan Foyth and Kyle Walker-Peters. Eric Dier and Moussa Sissoko started as a double pivot. Christian Eriksen was flanked by Giovani Lo Celso and Ryan Sessegnon. The away side also started without a recognised striker, with Lucas Moura spearheading the side

If you want to read the full tactical breakdown of this game, head over to totalfootballanalysis.com or click HERE

If you love tactical analysis, then you’ll love the digital magazines from totalfootballanalysis.com – a guaranteed 100+ pages of pure tactical analysis covering topics from the Premier League, Serie A, La Liga, Bundesliga and many, many more. Buy your copy of the December issue for just ₤4.99 here

A switch of teams for Haaland is unnecessary at the moment

How much is each Champions League squad worth?